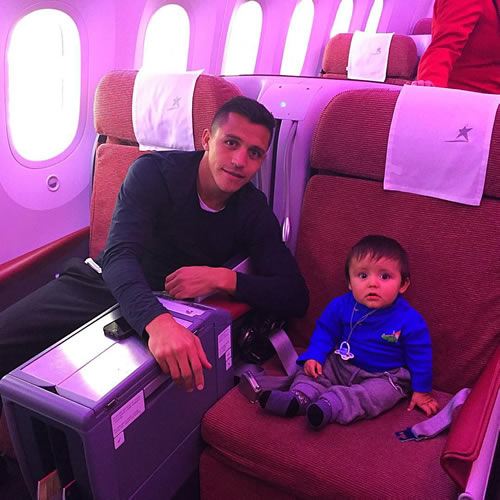 Alexis Sanchez has taken to social media to reveal his delight at being joined by a young friend on his flight back to the UK from international duty with Chile.

The 26-year-old jetted back to London on Wednesday night as he turns his attentions to Arsenal and helping the Gunners prepare for their Premier League clash against Watford on Saturday evening.

And Sanchez posted the picture above of himself on the flight home on his Instagram account on Wednesday night.

The Chilean wrote: “What a surprise I found myself with on the plane with the wonder boy 💺✈️ . Alexis Sanchez 😂😂😂😂😂😂”

Sanchez has been in fine form for Arsenal so far this season and has already scored five Premier League goals for the Gunners.

He netted twice and was named man of the match as the north London side secured a 3-0 win over Manchester United in their most recent top-flight outing.

That win left Arsene Wenger’s men in second place in the Premier League table and two points behind leaders Manchester City heading into this weekend’s trip to Watford.

Arsenal star Per Mertesacker: Why Theo Walcott can scare defences