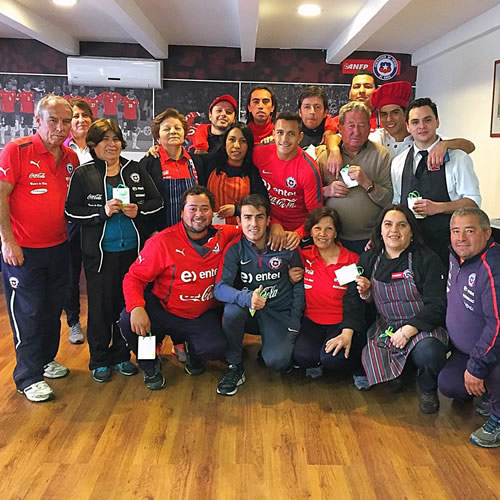 Alexis Sanchez has already firmly established himself as a favourite amongst Arsenal fans – and now the Chile international has once again shown his class off the pitch.

The 26-year-old forward has taken to social media to pay tribute to all of the backroom staff who were present in helping Chile win the Copa America over the summer.

He bought them all gifts and then posed for a picture with them in a classy move.

Sanchez, who is currently on duty with his national team, posted the picture above on his personal Instagram account on Wednesday evening and wrote: “These are people who have also been very important part of being able to win the Copa America 🏆

“Thanks again for having our training gear and football pitches in good shape and breakfast every day .. always with a willingness and a happy face and that is means so very much, thank you again 👏 . And a small gift of appreciation 🎁🎁☺️ . @ wilvas7”

He has already netted five times in the top flight this term for Arsene Wenger’s men to help them up to second place in the table and two points behind leaders Manchester City.

Sanchez will be expecting to feature when Arsenal return to Premier League action with a trip to Watford after the international break on 17 October.