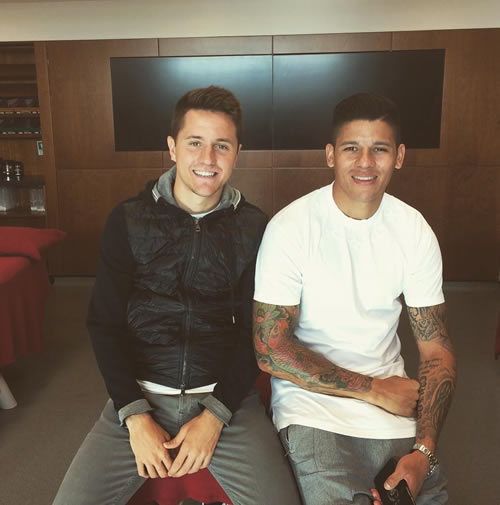 Their team-mates may be busy on international duty, but Ander Herrera and Marcos Rojo have been hard at work at the Manchester United training ground.

Rojo has been out of action in recent weeks with hamstring injury and sat out last Sunday’s 3-0 loss to Arsenal at Emirates Stadium.

The defender has remained in Manchester during the international break to work on his fitness in a bid to be ready for United’s Premier League trip to Everton on 17 October.

Herrera, meanwhile, has not featured for the Red Devils since the 2-1 Champions League defeat by PSV Eindhoven last month.

The Spaniard is believed to have been struggling with a knee problem.

However, both Rojo and Herrera were in training at United’s Carrington complex on Thursday, as the duo handed Louis van Gaal a timely boost after the disappointment of last weekend’s loss at The Emirates.

Both Herrera and Rojo will be hoping to feature for the trip to Goodison Park after the international break.