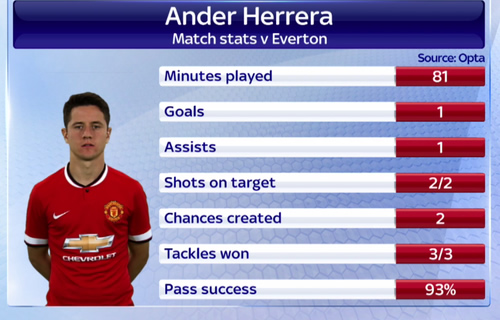 Ander Herrera was a central figure as Manchester United returned to winning ways with an impressive 3-0 win over Everton at Goodison Park on Saturday afternoon.

The Spanish midfielder, who made his return from a knee injury against the Toffees played 81 minutes on Merseyside and scored one and set up another as Louis van Gaal’s men bounced back from their loss to Arsenal before the international break.

And to cap it all off, Herrera completed an impressive 93 per cent of his passes against Roberto Martinez’s men.

The stats, provided by Sky Sports, suggest that Herrera could be set for a regular run in Van Gaal’s first team at Old Trafford.

The 26-year-old has only started three Premier League games for the Red Devils so far this season but could be in line for some more top-flight action in the coming weeks.