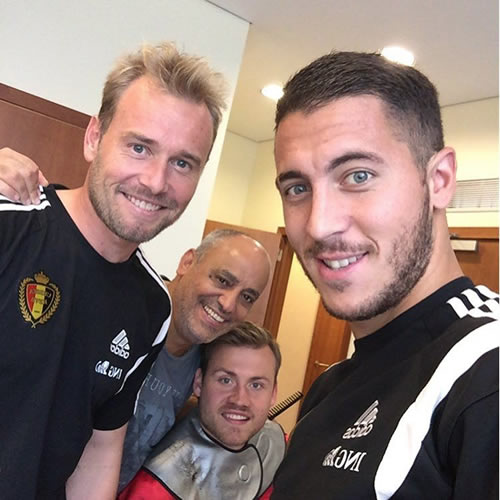 Eden Hazard has taken to social media to show off his latest haircut – along with Liverpool goalkeeper Simon Mignolet.

The Chelsea playmaker is looking to put the west London club’s dismal start to the season to one side as he turns his attentions to Belgium duty with his compatriot Mignolet.

And the 24-year-old attacker looked in good spirits indeed as he showed off his latest trim with the Liverpool shot-stopper.

Hazard posted the picture above of himself with the Belgium goalkeeper on his personal Instagram account and wrote: “Just got a new haircut ✂️✂️ @22mignolet22 @jf_gillet_1”

PFA player of the year Hazard, who joined the Blues from Lille back in 2012, is yet to find the net for Chelsea this season as Jose Mourinho’s men have struggled to find consistent form since the start of the new campaign.

His deflected strike during Chelsea’s 2-0 win over Arsenal last month was recorded as a Calum Chambers own goal.

Chelsea slumped to a surprise 3-1 loss to Southampton at Stamford Bridge in the top flight on Saturday evening to leave Mourinho’s men a staggering 10 points behind leaders Manchester City heading into the international break.

The Blues have already suffered five defeats in all competitions this season, including a 2-1 loss to FC Porto in the Champions League, in which Hazard was a second-half substitute.