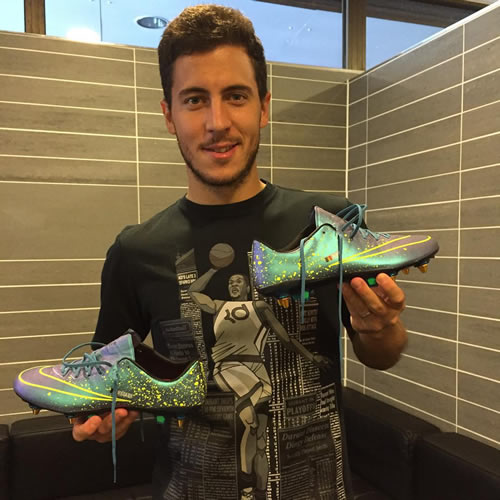 Eden Hazard looked in good spirits on Friday despite Chelsea’s patchy form as the Blues geared up for their Premier League clash with Southampton at Stamford Bridge on Saturday evening.

The west London side head into the game on the back of their 2-1 loss to FC Porto in the Champions League on Tuesday night as Jose Mourinho’s men slumped to their fifth defeat of the season in all competitions.

Chelsea are looking to return to winning ways in the top flight after their 2-2 draw with Newcastle United at St James’ Park last weekend.

And Hazard is clearly looking forward to lining up for the Blues in his new Nike boots, if his latest post on social media is anything to go by.

Hazard posted the picture above on his personal Instagram account on Friday afternoon and wrote: “Love the new look. #mercurial #vapor #electroflare

Get your own pair from the @nikefootball app.”

Hazard is yet to score for Chelsea this season after his deflected strike against Arsenal last month went down as a Calum Chambers own goal.

Chelsea head into Saturday’s game in 15th place in the Premier League table.

Photos: Coutinho, Moreno all smiles as Liverpool train ahead of Everton clash