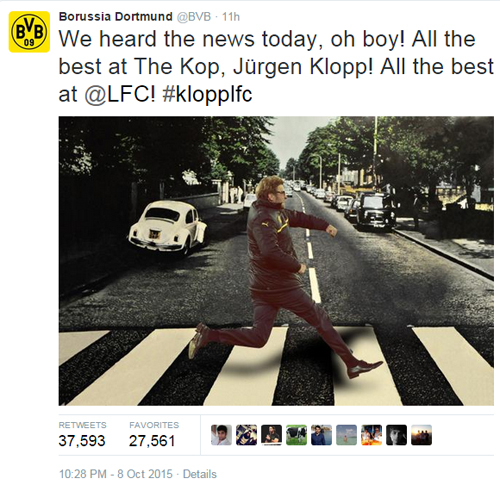 Jurgen Klopp may no longer be their manager, but Borussia Dortmund remain one of the coolest clubs in European football.

Their former head coach is set to take over the reins at Anfield after the 48-year-old agreed a three-year deal with the 18-time English champions on Thursday evening.

The charismatic German guided Dortmund to two Bundesliga titles, two domestic cups and the Champions League final during an eight-year spell in charge.

Although Klopp left BVB in the summer, Dortmund clearly hold their ex-manager in high esteem after posting a brilliant Beatles-themed message on Twitter after news of his appointment broke.

Klopp took Dortmund to six in his first season in 2009, led them into the Europa League the next year and then, with a squad full of exciting young talent, oversaw league title wins in 2010-11 and 2011-12, adding the German Cup in the latter campaign.

He earned even greater admiration in the 2012-13 season as he steered Dortmund all the way to the Champions League final at Wembley, where they lost to Bayern Munich. Dortmund reached another domestic cup final in 2014, but again came up short against Bayern.