Mesut Ozil looked to be in a reflective mood on Tuesday afternoon... 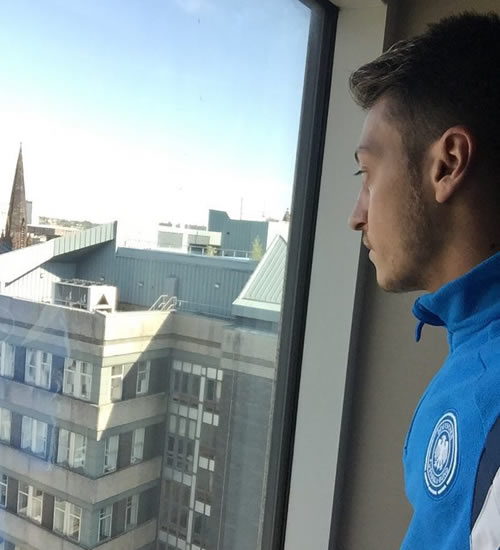 Mesut Ozil has taken to social media to reveal his excitement at joining up with his German team-mates following Arsenal’s impressive win over Manchester United in the Premier League on Sunday afternoon.

Ozil played a pivotal role in helping Arsene Wenger’s men seal victory over their bitter rivals and move up to second place in the Premier League table.

The 26-year-old scored one and set up one as the Gunners ran riot in a blistering opening 20 minutes at Emirates Stadium.

And the playmaker looked to be in a reflective mood on Tuesday afternoon as he joined up with his Germany team-mates in Frankfurt ahead of their Euro 2016 qualifiers against Republic of Ireland and Georgia in the coming days.

The former Real Madrid star posted the picture above on his personal Instagram account and wrote: “#Frankfurt @dfb_team”

Ozil joined Arsenal in a club-record transfer deal from Real Madrid back in the summer of 2013. He has helped the north London side win two FA Cups over the last two seasons.