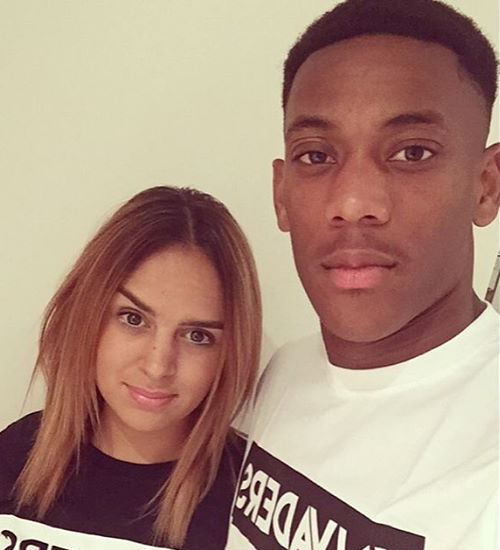 Anthony Martial looked relaxed as he posed for a picture with his wife Samantha in the wake of Manchester United’s 3-0 defeat by Arsenal on Sunday afternoon.

Martial played the full 90 minutes as Louis van Gaal’s men slumped to a 3-0 loss at Emirates Stadium to leave the Red Devils third in the Premier League table heading into the international break.

He has now turned his attentions to international duty and helping France continue their preparations for next summer’s Euro 2016 tournament.

However, the teenager looked chilled out as he posed for a snap with his wife Samantha.

Samantha Martial shared the picture above on her personal Instagram account on Wednesday evening and wrote: “@invaders75 baby love you @martial_9

Martial has hit the ground running at United since his big-money deadline-day transfer to Old Trafford from Monaco last month.

He has scored four goals and notched up one assist for his team-mates in all competitions and has been a regular fixture in Van Gaal’s starting line-up.

Martial will be expecting to feature when Manchester United return to Premier League action with a trip to Goodison Park to face Everton after the international break on 17 October.