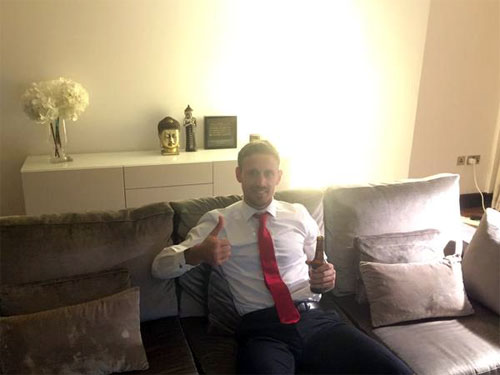 Nacho Monreal indulged in a well-earned beer after Arsenal beat Manchster United 3-0 at The Emirates on Sunday afternoon.

The north London side surged into an early lead when Alexis Sanchez flicked home Mesut Ozil’s low cross in the sixth minute.

And the World Cup winner added a goal of his own moments later when he slotted in Theo Walcott’s pass.

Sanchez then made it 3-0 with his second of the day when he fired in a long-range effort in the 19th minute.

And Monreal, who impressed alongside Gabriel Paulista, Per Mertesacker and Hector Bellerin at the back, took to Twitter to thank Arsenal fans for their support as he savoured an ice-cold beer.

Cheers to all Arsenal fans! Thank you for your support 🙌 . Great win today! #AFCvMUFC pic.twitter.com/S3tr9EeGGx

Arsenal hoisted themselves about United and into second place courtesy of their emphatic win against their bitter rivals.

Arsene Wenger’s side are two points behind current leaders Manchester City heading into the international break.