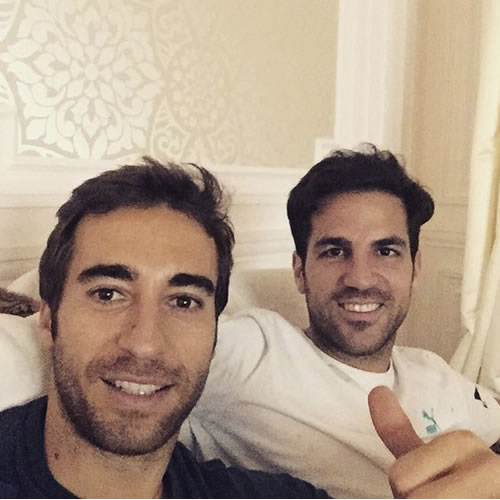 Mathieu Flamini looked to put the disappointment of Arsenal’s League Cup exit at the hands of Sheffield United behind him on Wednesday afternoon as he enjoyed some downtime with Chelsea midfielder Cesc Fabregas.

The French midfielder started the Gunners’ fourth-round clash at Hillsborough on Tuesday night but was powerless to prevent Arsene Wenger’s men from slipping to a 3-0 loss to Wednesday.

Flamini and Fabregas are good friends from their Arsenal days – and the midfield duo enjoyed a relaxing afternoon together on Wednesday.

Flamini shared the picture above on his personal Instagram account and wrote: “Afternoon with my friend @cescf4bregas”

Fabregas did not feature as Chelsea were also dumped out of the League Cup on Tuesday night after a loss to Stoke City on penalties.

Arsenal, who are level on points with leaders Manchester City, take on Swansea City in the Premier League on Saturday afternoon, while Chelsea host Liverpool at Stamford Bridge in the early kick-off.