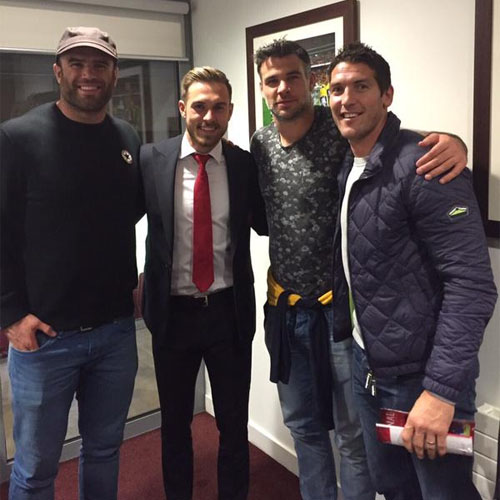 Aaron Ramsey may have picked one or two things up from his Wales rugby pals about gut and heart over the past week.

Arsenal picked themselves up off the floor to secure an emphatic 3-0 win against bitter rivals Manchester United at The Emirates on Sunday just days after a humiliating 3-2 loss to Greek side Olympiacos in the Champions League.

Warren Gatland’s Wales rugby team know a thing or two about bouncing back from adversity and had to survive a first-half onslaught to beat World Cup hosts England in front of a partisan Twickenham last weekend.

Wales were 33-13 winners against Fiji on Thursday before England lost to Australia to seal the Red Dragon’s place in the quarter-finals, so no wonder Ramsey was all smiles with Jamie Roberts, James Hook and Mike Phillips after a great weekend of sport for the Welshmen.

Alexis Sanchez broke the deadlock in the sixth minute before Mesut Ozil doubled Arsenal’s lead 60 seconds later, before the Chile international scored a third for the hosts after a blistering opening 20 minutes.