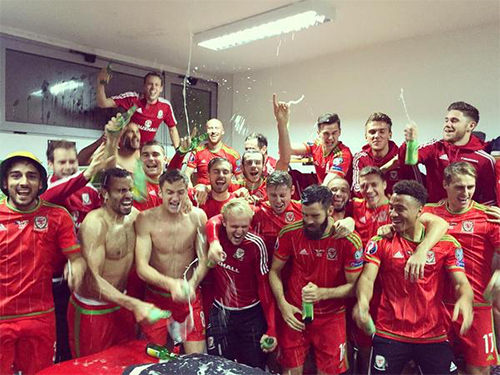 Gareth Bale snapped a dressing room photo with Arsenal midfielder Aaron Ramsey and his other Wales team-mates after their historic Euro 2016 qualification.

The Welshmen needed a point from their clash against Bosnia-Herzegovina to qualify for next summer’s tournament, but Chris Coleman’s side suffered a 2-0 loss.

However, in spite of the defeat, Wales reached Euro 2016 after Cyprus were surprise 2-1 winners against third-placed Israel, prompting wild celebrations from the Welsh.

Real Madrid winger Bale, who has cored seven goals for Wales in their qualifying campaign, posted a photo of his triumphant Weslh team-mates on his Instagram page.

Ramsey, who helped Arsenal ease to a 3-0 win against Manchester United in their most recent Premier League fixture, posted a message on Twitter following their historic night.

The Red Dragon have qualified for their first major tournament since 1958.

Wales’ first defeat of the campaign saw them overtaken at the top of Group B by Belgium, who qualified with a 4-1 win in Andorra.