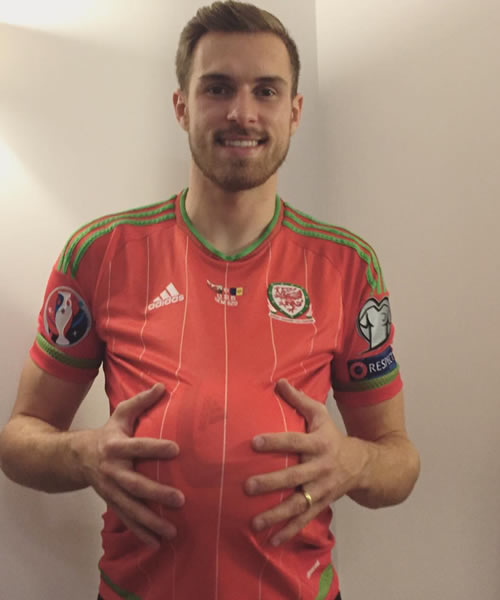 Aaron Ramsey was all smiles as he posed for a picture after helping Wales beat Andorra 2-0 on Tuesday night and round off their Euro 2016 qualifying campaign in style.

The Arsenal midfielder netted in the 50th minute to send Chris Coleman’s men on their way to victory at Cardiff City Stadium, before Gareth Bale added another strike four minutes from time.

The win came after Coleman’s men had already secured their place at their first major tournament since the 1958 World Cup.

And Ramsey used his Instagram account to celebrate his goal and send a message to his wife Colleen, who is currently pregnant with the couple’s first child.

Ramsey posted the picture above on his personal Instagram account and wrote: “Special goal for me tonight, only a few weeks to go…

Ramsey will be expecting to feature when Arsenal return to action with a trip to Watford in the Premier League on Saturday.

The Gunners, who are currently second in the table, are looking to build on their 3-0 win over Manchester United in their most recent outing.