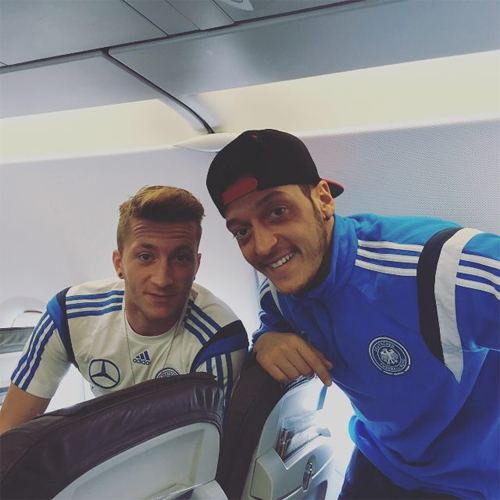 Mesut Ozil was all smiles as he posed for a snap with Liverpool target Marco Reus.

The Germany international heads into the international break in fine form after he scored and made an assist in a resounding 3-0 victory over Manchester United at The Emirates on Sunday afternoon.

Reus, meanwhile, has been regularly linked with a move to Liverpool over the past 12 months, whilst his former Borussia Dortmund manager looks set to take over the reins at Anfield.

Germany duo Ozil and Reus posed for a selfie as Joachim Low’s squad head to the Republic of Ireland for their Euro 2016 qualifier at The Aviva in Dublin this weekend.

Ozil wrote on the photo-sharing app: “Greetings from the DFB plane to Ireland! Before we are heading back to Germany we can hopefully “book” our ticket to France! ✌✈ @dfb_team #DieMannschaft”

Ozil has been in good form for the Gunners this term and scored one goal and notched up an assist as Arsenal beat Manchester United 3-0 on Sunday.

He joined Arsenal in a club-record transfer deal from Real Madrid back in the summer of 2013. He has helped the north London side win two FA Cups over the last two seasons.