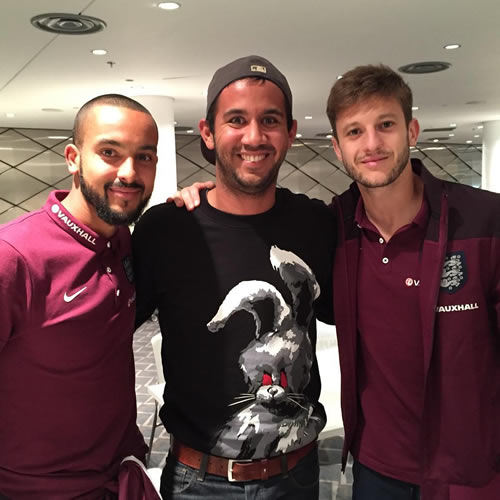 Theo Walcott was all smiles as he caught up with some old pals after England’s 2-0 win over Estonia at Wembley on Friday night.

The Arsenal forward played 83 minutes and scored the Three Lions’ opener on the stroke of half-time in north London to send the home side on their way to a Euro 2016 qualifier win.

Raheem Sterling then made the three points secure when he scored in the 85th minute to wrap up a convincing victory for Roy Hodgson’s men.

Walcott made use of a free moment after the game to pose for a snap with Liverpool midfielder Adam Lallana and Bognor Regis’s Jake Thomson, with the trio all having come through Southampton’s youth system.

Walcott will be hoping to feature when Arsenal return to Premier League action with a trip to Watford on Saturday 17 October.