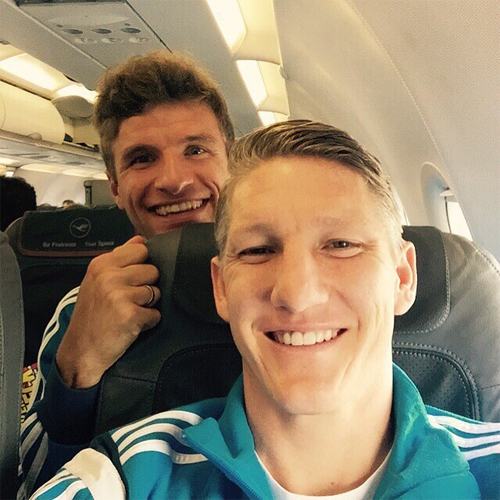 Bastian Schweinsteiger teased Manchester United supporters on Wednesday after he posed for a selfie with Red Devils target Thomas Muller.

The 20-time English champions pursued the Germany international in the summer transfer window, before United signed Anthony Martial in a £36m deal from Ligue 1 side Monaco.

Bayern Munich chief executive Karl-Heinz Rummenigge revealed that United have flooded his inbox with emails, expressing their interest in the 26-year-old centre-forward.

While the Bundesliga champions have insisted Muller is not for sale, United supporters will hope that Schweinsteiger worked his charm as he sat next to the striker on their flight to Dublin.

Schweinsteiger wrote on his Instagram page: “Greetings from Thomas Müller and myself!”

Joachim Low’s Germany side face the Republic of Ireland in their latest Euro 2016 qualifier in Dublin this weekend.

Schweinsteiger moved to United in a reported £6.7m deal from Bayern in the summer transfer window.

The 31-year-old endured a forgettable performance in a 3-0 loss to bitter rivals on Arsenal on Sunday afternoon.