Photo: Cesc Fabregas all smiles with his girlfriend ahead of West Ham v Chelsea 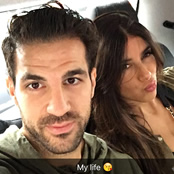 Cesc Fabregas looked in a relaxed mood as he posed for a selfie with his girlfriend Daniella Semaan as Chelsea continue their preparations for Saturday’s Premier League clash with West Ham United.

The Blues are looking to return to winning ways after being held to a goalless draw by Dynamo Kyiv in the Champions League on Tuesday night.

Jose Mourinho’s men did secure victory in their most recent Premier League outing, as they beat Aston Villa 2-0 at Stamford Bridge last weekend.

However, the west London club have been struggling to find consistent form in the top flight and are currently 10 points behind leaders Manchester City.

Fabregas took his mind of Chelsea’s struggles as he enjoyed some downtime with his long-term partner on Thursday evening.

The Spaniard uploaded the picture above onto his personal Snapchat account and wrote: “My life.”

Fabregas has made nine Premier League appearances for Chelsea so far this season.