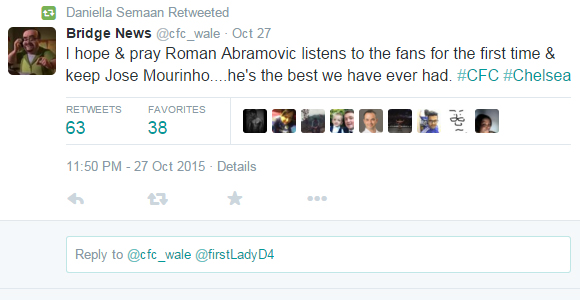 Jose Mourinho may be feeling the heat after Chelsea’s League Cup exit, but the under-fire manager can count on the support of Cesc Fabregas’ girlfriend – and presumably the midfielder, too.

The Portuguese is reportedly fighting for his future at the defending Premier League champions after the west London side crashed out of the Capital One Cup in a penalty shootout at Britannia Stadium.

The Blues have won just one of their last seven games in all competitions and are 15th in the Premier League table after a return of 11 points from their first 10 top-flight outings.

But Fabregas’ girlfriend Daniella Semaan has retweeted messages of support for Mourinho amid reports of dressing room discontent in apparent show of solidarity from her and her football star boyfriend.

I hope & pray Roman Abramovic listens to the fans for the first time & keep Jose Mourinho….he's the best we have ever had. #CFC #Chelsea

The defending Premier League champions face Liverpool in their next game at Stamford Bridge on Saturday afternoon.

Chelsea are in 15th place and 11 points behind leaders Manchester City after a return of 11 points from 10 games.

The Blues have already lost six times in the Premier League, including two defeats at Stamford Bridge.