While Cesc Fabregas is working on his six pack, the Chelsea midfielder's daughter gets stuck into a pack of chocolate 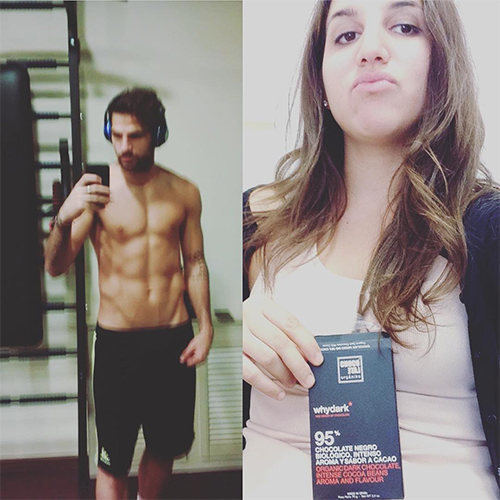 Cesc Fabregas looks to be working on his six pack despite the Chelsea midfielder’s sister tempting the Premier League winner with chocolate treats.

Fabregas also earned his 100th cap for La Roja in a 1-0 victory over Ukraine in the final Euro 2016 qualifier on Monday night.

And the former Arsenal captain’s sister posed with a bar chocolate alongside a photo of Fabregas tensing his torso, highlighting the midfielder’s physique.

She wrote on her Instagram page: “Guess the difference…?? 😂👍🏼🍫 @cescf4bregas”

Fabregas will now turn his attentions back to Chelsea and helping the west London club turn around their disastrous start to the season.

The Blues, who lost 3-1 to Southampton in their most recent outing, host Aston Villa at Stamford Bridge on Saturday afternoon.

The west London side, who have already lost five games this season, are currently 10 points behind Premier League leaders Manchester City.