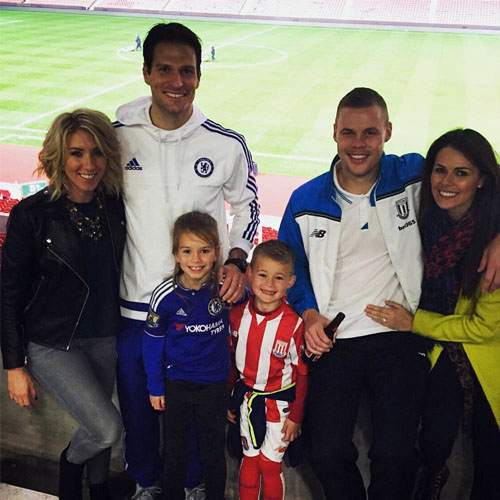 Asmir Begovic may have endured a miserable return to Stoke City on Tuesday night, but the Chelsea goalkeeper did get to catch up with former team-mate Ryan Shawcross at Britannia Stadium.

The shot stopper was unable to prevent Jose Mourinho’s struggling Blues side from succumbing to a 5-4 penalty shootout defeat by the Potters.

Begovic spent six seasons at Britannia Stadium alongside Shawcross before he completed a £7m move to the defending Premier League champions in the summer transfer window.

And the Chelsea goalkeeper posted the above snap with Shawcross and their respective families at The Britannia last night.

Earlier on Wednesday, Begovic urged Chelsea to clear their heads after their League Cup exit ahead of their clash against Liverpool on Twitter.

Disappointing result for us tonight. We'll need to clear our heads and focus on Saturday. Thanks to Stoke fans for warm welcome.

Chelsea are in 15th place and 11 points behind leaders Manchester City after a return of 11 points from 10 games.

The Blues have already lost six times in the Premier League, including two defeats at Stamford Bridge.