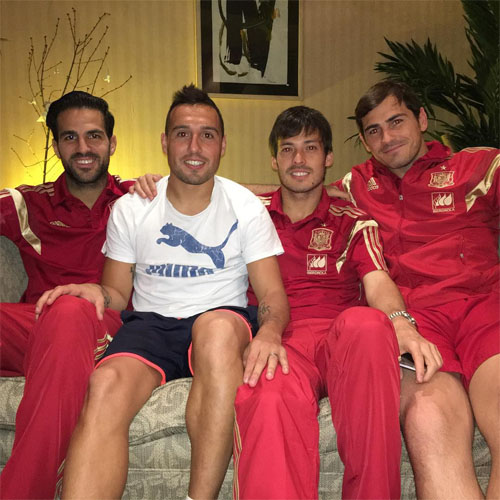 Cesc Fabregas was all smiles as he bonded with his fellow Spanish stars Santi Cazorla, Iker Casillas and David Silva on Friday night.

La Roja booked their place in Euro 2016 courtesy of a 4-0 victory over Luxembourg in Group C on Friday night.

And Fabregas posed with three other members of Spain’s European championship-winning side in 2008 after La Roja booked their place in next summer’s tournament.

Spain and Manchester City did suffer a blow after the playmaker suffered a sprained ankle.

Vicente del Bosque’s side are five points ahead of second-placed Slovakia in Group C after recovering from a slow start to the season.

La Rojo have won back-to-back European championships after beating Germany in 2008 before an empathic win against Italy in 2012.