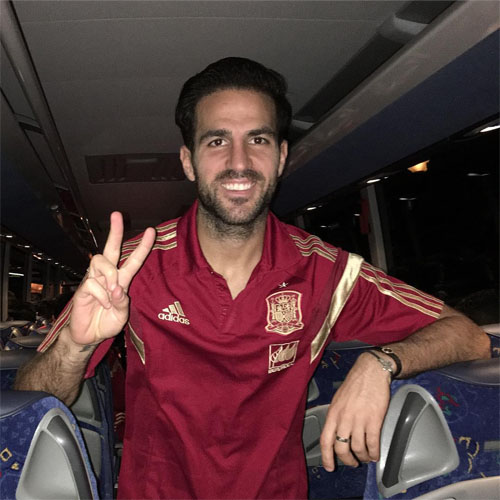 Cesc Fabregas has snapped a selfie to celebrate his new Spain record on Friday night.

The Chelsea midfielder set up Spain’s second goal in a 4-0 victory over Luxembourg in Group C last night after braces from Santi Cazorla and Paco Alcacer.

Fabregas’s assist was his 28th in his La Roja career, breaking the previous record set by Barcelona and Spain legend Xavi Hernandez.

The Chelsea playmaker posed for a snap on Spain team coach following their emphatic qualifier win which sealed their place in Euro 2016.

Fabregas wrote on his Instagram page: “I feel extremely proud to have become the player with most assists of the Spanish National Team! Game 99…. Keep it up!!!!!! 😁😁😁😁😉😘 #specialmoments”

The former Arsenal and Barcelona midfielder made more assists than any other player in the Premier League last season after creating 19 goals for English champions Chelsea.

However, the 28-year-old has endured a slow start to the Premier League campaign and Fabregas has failed to create a single goal for the west London side in eight games.

Fabregas has, however, made an assist in Chelsea’s 4-0 win against Maccabi Tel-Aviv.