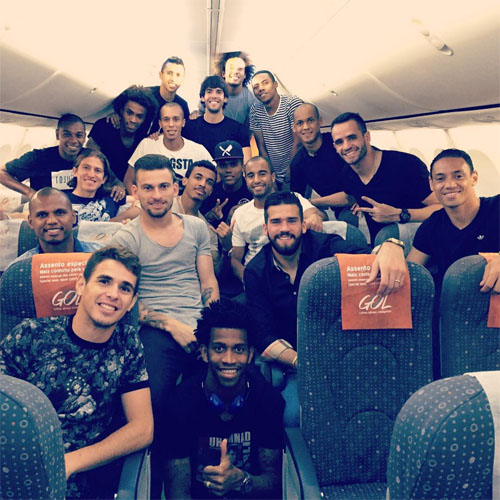 Oscar looked relieved to temporarily forget about a horror start to the Premier League with a win for Brazil on Tuesday night.

Dunga’s side kick-started their 2018 World Cup qualifying campaign with a 3-1 victory over Venezuela last night after having lost to Alexis Sanchez’s Chile last Thursday.

Oscar’s Chelsea team-mate Willian scored in the 37th and 42nd minutes to put Brazil in command before Ricardo Olivieira cemented their first win of the new qualifying campaign.

And the Chelsea forward, who has been unable to help the west London side revert their poor league form in recent weeks, was all smiles alongside Manchester City man Fernandinho and AC Milan legend Kaka.

The Brazilian was powerless to prevent Chelsea suffering a 3-1 loss to Southampton in their most-recent Premier League outing.

Chelsea are 16th in the table and 10 points behind current leaders Manchester City after eight games.