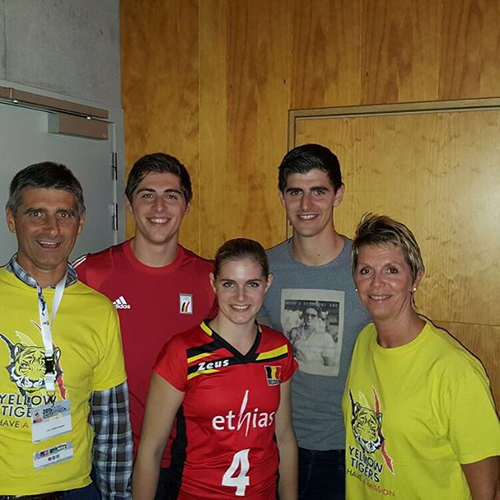 Thibaut Courtois appears to be keeping himself in good spirits despite his injury struggles.

The Chelsea goalkeeper went underwent surgery earlier this month after suffering a knee injury in training, with the Belgium international expected to be out of action for a number of months.

However, the shot-stopper does not appear to be letting his injury setback affect his mood, as he posed for a picture with his family, including his volleyball player sister Valerie.

Courtois, who has been replaced in the Chelsea goal by Asmir Begovic, shared the picture above on his personal Instagram account on Thursday morning and wrote: “Happy to see all the family yesterday and support my sister and her team! Good luck today against Serbia! @valerioo4 #yellowtigers #belgium #eurovolley2015”

Chelsea, who were beaten 2-1 by FC Porto in the Champions League on Tuesday night, return to Premier League action when they host Southampton at the weekend.

The Blues, who have suffered five defeats already this season, are currently 15th in the Premier League after winning just two of their opening seven top-flight games.