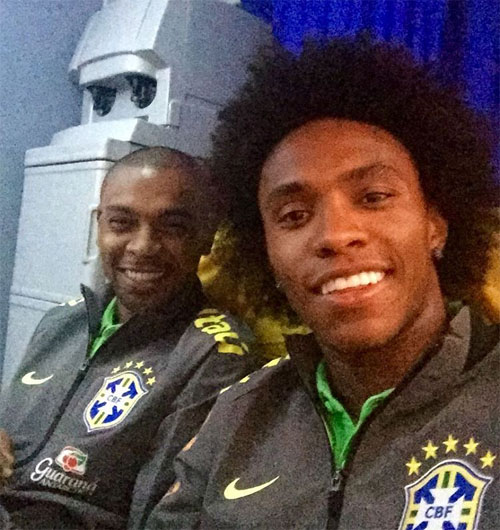 Willian was all smiles as he posed for a snap with Manchester City midfielder Fernandinho.

The Chelsea forward looks to be enjoying the chance to forget club football for a week or two after the west London side’s forgettable start to the season.

The Blues are in 16th place and 10 points behind leaders City after Jose Mourinho’s side lost 3-1 to Southampton at St Mary’s on Saturday evening.

Fernandinho has plenty to smiles about after Manuel Pellegrini’s side were emphatic 6-1 winners against Newcastle United, moving back to the top of the table.

And Willian, who has scored four successive free-kicks in his last four games, snapped a selfie with the City midfielder during the Brazilian camp.

Willian posted on the photo-sharing app: “Resting with my brother”