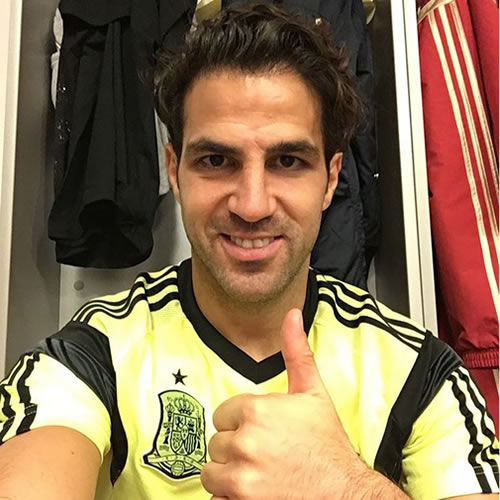 Cesc Fabregas has taken to social media to reveal his delight at making his 100th appearance for Spain on Monday night.

The 28-year-old played 64 minutes as Vicente Del Bosque’s men concluded their qualification campaign for next summer’s Euro 2016 tournament with a 1-0 win over Ukraine.

The night marked the Chelsea midfielder’s 100th appearance for his national side’s senior team, and despite missing a first-half penalty, the former Arsenal captain was quick to celebrate the feat with a post-match selfie.

Fabregas posted the picture above on his personal Instagram account and wrote: “100 matches for the team!! 100 unforgettable moments!! I’ve lived many unrepeatable moments. Thank you all for your love and support. A big hug!”

Fabregas will now turn his attentions back to Chelsea and helping the west London club turn around their disastrous start to the season.

The Blues, who lost 3-1 to Southampton in their most recent outing, host Aston Villa at Stamford Bridge on Saturday afternoon.

The west London side, who have already lost five games this season, are currently 10 points behind Premier League leaders Manchester City.