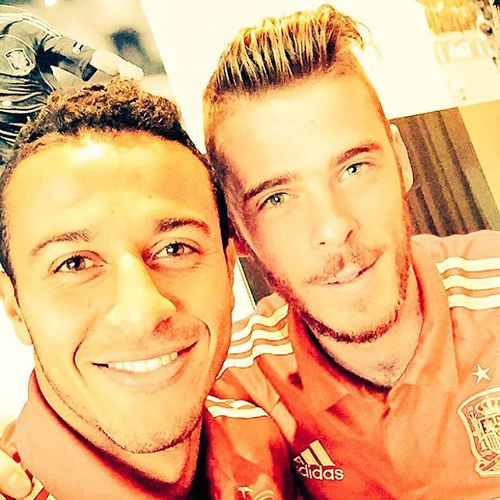 David De Gea has taken to social media to post a picture of himself with Thiago Alcantara while on international duty with Spain.

The Manchester United goalkeeper is currently on duty with his national team-mates as Spain gear up for their Euro 2016 qualifiers against Luxembourg and Ukraine in the coming weeks.

United were heavily linked with a big-money bid for Alcantara after he fell out of favour at Barcelona, but the Spaniard eventually opted to join Bayern Munich in the summer of 2013.

De Gea and Alcantara remain close friends, and the United shot-stopper used his Instagram account to pay tribute to the midfielder on Wednesday evening.

He uploaded the picture above onto the photo-sharing app and wrote: “Teammates who end up being friends. I missed you Thiago. @sefutbol”

De Gea will be expecting to feature for Manchester United when they return to Premier League action with a trip to Goodison Park on Saturday 17 October.

The Red Devils are currently third in the table and two points behind leaders Manchester City.