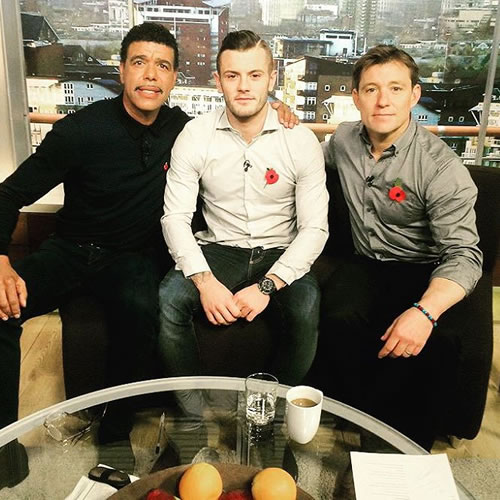 Jack Wilshere was all smiles as he posed for a picture after his appearance on Sky Sports‘ ‘Goals on Sunday’ this weekend.

The midfielder is yet to feature for Arsenal this season after undergoing surgery on a hairline fracture of his leg back in August.

Wilshere was a special guest on the Sky Sports show on Sunday, and the Gunners star used his personal Instagram account to reflect on his guest appearance.

He posted the picture above of himself with Ben Shephard and Chris Kamara and wrote: “Had fun on Goals on Sunday with Kammy and Ben!! #TopLads”

The north London side, who beat Bayern Munich 2-0 last week, secured their fourth straight win in all competitions on Saturday with a 2-1 victory over Everton to move them top of the Premier League table.

The Gunners’ next game is a trip to Sheffield Wednesday in the fourth round of the FA Cup on Tuesday night.