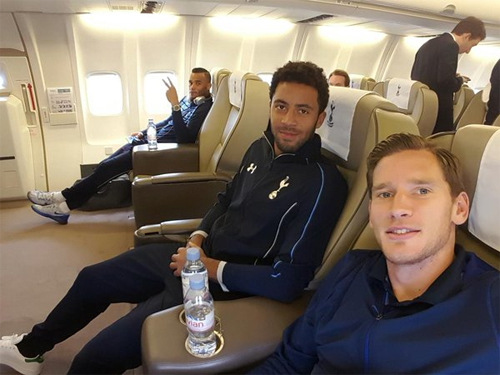 Jan Vertonghen was all smiles as he posed with Tottenham team-mates Mousa Dembele and Michel Vorm ahead of their flight to Belgium on Wednesday.

The north London side face Anderlecht in the Europa League on Thursday night after having collected four points from a possible six in two games.

Tottenham duo Vertonghen and Dembele were pleased to be returning to their homeland for their third Europa League game of the season at Constant Vanden Stock Stadium in Brussels.

Tottenham are top of Group J after a win and a draw.

Spurs warmed up for their clash with Anderlecht with a goalless draw against Liverpool at White Hart Lane in the Premier League on Saturday afternoon.

• Anderlecht are without a victory in five European games (D3 L2).

• Spurs have not won in their last three European away fixtures (D1 L2).

• Anderlecht advanced to the round of 32 in all four of their previous UEFA Cup and UEFA Europa League group stage campaigns, most recently in 2011/12.

• In seven previous UEFA Cup and UEFA Europa League campaigns, Tottenham have failed to reach the round of 32 just once – in 2011/12.