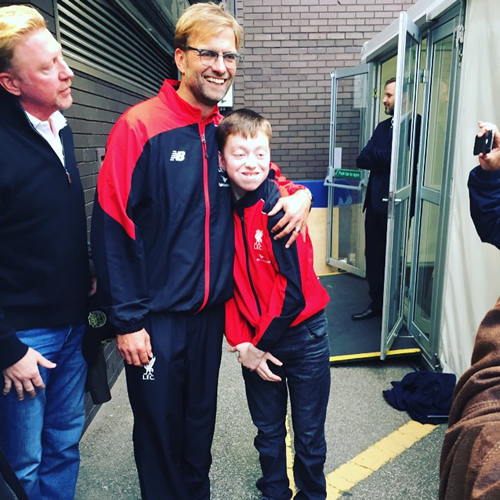 Jurgen Klopp was all smiles after Liverpool's draw with Tottenham Photo: Boris Becker/Instagram

Jurgen Klopp has already proved himself to be a popular figure at Liverpool in the days since his appointment.

The German coach was afforded a special reception from the Reds faithful as he took charge of his first Liverpool game at Tottenham on Saturday lunchtime.

And the former Borussia Dortmund boss continued to improve his glowing reputation by spending time with some Liverpool fans after the goalless draw at White Hart Lane.

Klopp was pictured all smiles with the son on a friend of tennis legend Boris Becker after the north London stalemate.

Becker posted the picture above on his personal Instagram account and wrote: “Meeting #Klopp after the game with my friend’s son Peter (diehard Liverpool fan) #Liverpool.”

Divock Origi was handed his first Premier League start up front against Spurs, and the striker hit the bar with a first-half header.

Tottenham’s best efforts came when substitute Clinton N’Jie and Harry Kane tested Simon Mignolet – but the game ended up all square as Liverpool headed back home with a point.