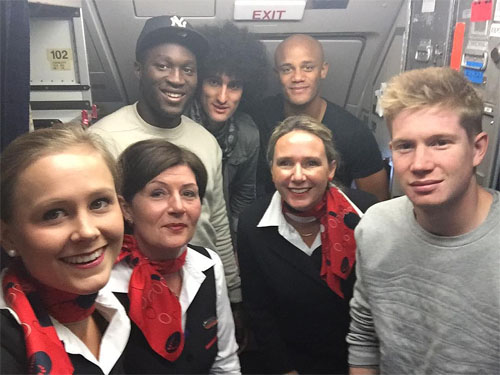 Kevin de Bruyne and Vincent Kompany cast their club rivalries aside as the Manchester City pair joined Marouane Fellaini and Romelu Lukaku for a snap.

The Belgium squad are celebrating their Euro 2016 qualification after a 3-1 victory over Israel on Tuesday night sealed top spot in Group B.

De Bruyne and Kompany could face Fellaini and his Manchester United team-mates in a matter of weeks with the Manchester derby on the horizon.

The towering Red Devils midfielder, meanwhile, could line up against Romelu Lukaku and his former club Everton at Goodison Park on Saturday afternoon.

City captain Kompany posted the above snap with his compatriots and some crew members on their flight home to Manchester ahead of a busy Premier League weekend.

Kompany wrote on the photo-sharing app: “SN Brussels crew looking after us, as always. Time to get back to business as usual. Massive games coming up for all of us. #MCFC #MUFC #Everton #EPL #Belgium”

De Bruyne and Komapny currently have bragging rights after the Citizens moved to the top of the Premier League thanks to their 6-1 win against Newcastle United.

The Red Devils are two points behind Manuel Pellegrini’s City side.