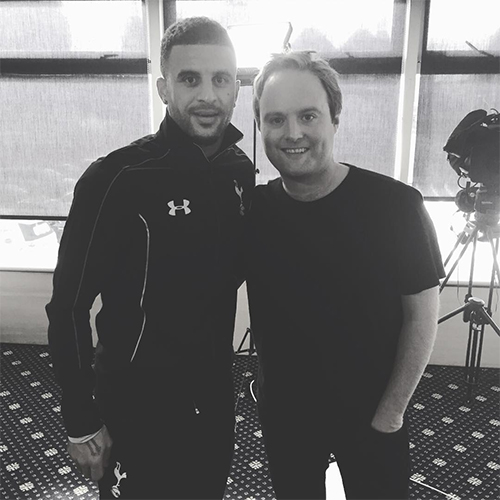 Kyle Walker caught up with Soccer Am star Tubes ahead of Tottenham Hotspur’s clash against Liverpool at White Hart Lane on Saturday afternoon.

The Spurs defender wasn’t part of Roy Hodgson’s England side for their 3-0 victory over Lithuania in their final Euro 2016 qualifier on Monday night.

Walker is currently competing with Liverpool right-back Nathaniel Clyne for the right-back berth in Roy Hodgson’s side.

The Spurs man will come up against his rival in north London on Saturday afternoon when Jurgen Klopp’s Liverpool make the trip to The Lane.

The Tottenham star met with Soccer AM host Tubes to discuss the upcoming Premier League fixture.

Walker wrote on the photo-sharing app: “Good to see @tubessocceram earlier for this Saturday’s @socceram. Always good to catch up”

The 25-year-old defender has featured in all eight of Tottenham’s Premier League games this season.

Walker, who moved to the north London outfit from Sheffield United in 2009, has netted three times in 117 top-flight appearances.