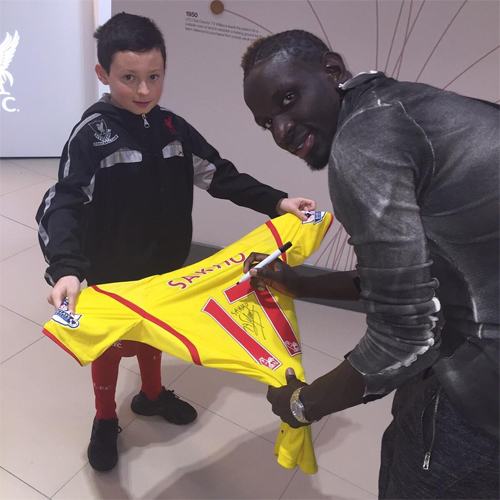 Mamadou Sakho says it was a nice surprise to meet some young Liverpool fans after training ahead of their clash against Bournemouth on Wednesday night.

The Reds defender could line up against the Cherries in the League Cup fourth-round clash at Anfield after having started all of Jurgen Klopp’s three games.

Sakho has enjoyed a sustained run in the Liverpool first-team in recent weeks following injury to centre-half rival Dejan Lovren.

And the France international was all smiles as he signed a shirt for a young Liverpool supporter after a training session at Melwood yesterday.

Sakho wrote on the photo-sharing app: “Nice surprise awaited me at the end of the training yesterday ‪#‎Souvenir‬‪#‎visit‬ ‪#‎YNWA‬ ‪#‎bestSupporters‬ ‪#‎Liverpool‬”

The 25-year-old centre-half also took to Twitter to post a photo with another Liverpool fan and his pal.

The former Paris Saint-Germain defender was out-of-favour under Klopp’s predecessor Brendan Rodgers before Lovren suffered an injury in the League Cup last month.

Sakho, who moved to the Reds from his boyhood club PSG in 2013, has made five appearances in the Premier League this season, racking up 540 top-flight minutes so far this term.

Liverpool have drawn their last five games in all competitions after a 1-1 stalemate with Southampton on Sunday afternoon.