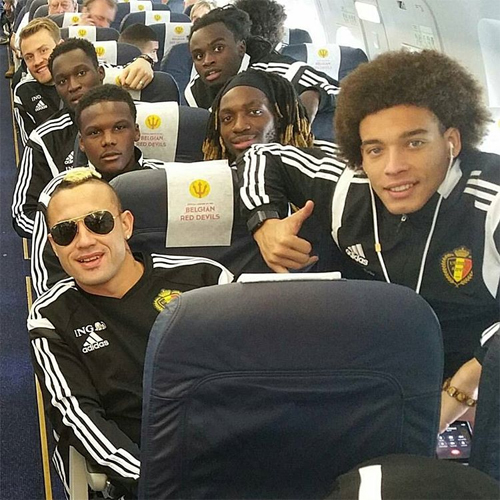 Simon Mignolet and Romelu Lukaku were derby rivals a matter of days ago, but the Everton and Liverpool stars were all smiles after Belgium booked their place in France 2016.

The Red Devils were 4-1 winners against Andorra in their European championship qualifiers on Saturday night thanks to goals from Radja Nainggolan, Kevin De Bruyne, Eden Hazard and Laurent Depoitre.

Belgium are in pole position to finish ahead of Chris Coleman’s Wales at the top of Group B after Belgium’s win hoisted themselves above the Red Dragon and two points clear ahead of their final Euro 2016 qualifier.

Liverpool number one Mignolet and Everton forward Lukaku were all smiles as Witsel snapped a selfie with his triumphant Belgium team-mates after booking their place in Euro 2016.

Belgium host third-placed Israel in their final game of the qualifying campaign.

Wales, meanwhile, will hope the Red Devils slip up and they beat Andorra to reclaim top spot.

Sir Alex Ferguson: Why Arsenal have stuck by Arsene Wenger