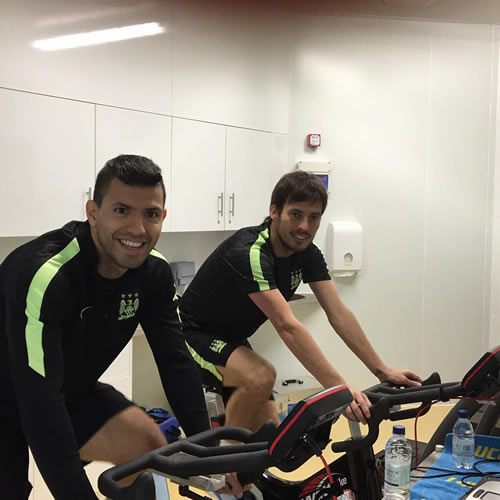 Sergio Aguero and David Silva are both looking in good spirits as Manchester City turn their attentions to Sunday’s blockbuster clash with Manchester United at Old Trafford.

The pair are currently sidelined due to injuries but appeared to be keeping themselves in a positive mood as their team-mates prepare for their crunch Premier League clash with United.

Neither Aguero nor Silva featured as City secured a dramatic late 2-1 win over Sevilla in the Champions League on Wednesday night.

But the pair are working hard on their fitness in a bid to return to action as soon as possible.

Aguero posted the picture above on his personal Instagram account and wrote: “At the gym, starting my recovery work out with the great David Silva.”

Aguero is expected to be out of action for around a month after the striker was carried off with a leg injury during Argentina’s World Cup qualifier against Ecuador.

City head into Sunday’s game top of the Premier League table and two points ahead of both Arsenal and Manchester United.