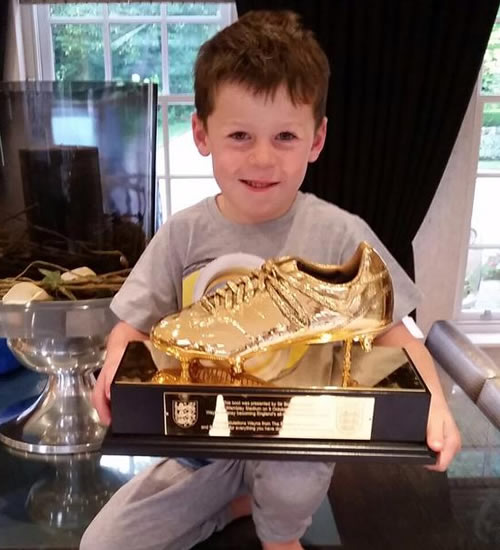 Wayne Rooney shared this picture of his so on Twitter Photo: Wayne Rooney/Twitter

Wayne Rooney has taken to social media to thank the Football Association after he was presented with a golden boot to mark his England goal record.

The Manchester United captain was presented with his special award by Sir Bobby before Friday night’s Euro 2016 qualifier clash with Estonia at Wembley.

Rooney missed the game, which the home side won 2-0, through injury but was still all smiles as he received the award from the England legend.

And the United skipper used his Twitter account to thank the FA for the trophy after handing it over to his son on Saturday morning.

Rooney posted the picture above on his personal Twitter account and wrote: “Well done to the lads last night @england and thank you to @FA for this golden boot.”

Silversmiths Thomas Lyte, who also work on the FA Cup trophy were commissioned to produce the boot to commemorate Rooney’s landmark achievement.