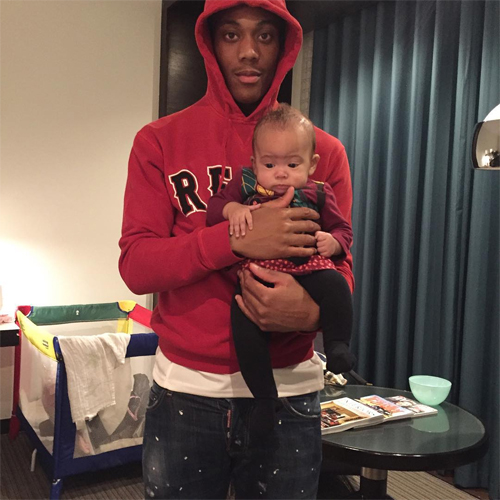 Anthony Martial spent some quality time with his daughter Peyton ahead of Manchester United’s clash against Middlesbrough in the League Cup on Wednesday night.

The 19-year-old France international has enjoyed a whirlwind start to his Red Devils career after Martial completed a £36m move to Old Trafford from Ligue 1 side Monaco on transfer deadline day in September.

The former Lyon man has wasted no time setting the Premier League alight with three goals in his first six appearances in the English top-flight.

Martial also scored in United’s 3-0 victory over Ipswich Town in the League Cup last month – and the Red Devils striker certainly looked focused on the visit of Boro as he chilled with his daughter.

The United striker’s wife Samantha posted the above snap and wrote on her Instagram page: “Who comes to the match today? ⚽️😜”

Martial has scored three goals and has made one assist in six Premier League games.

The France forward has also scored in the League Cup and the Champions League.

Jurgen Klopp: Why I was happy Liverpool signed Roberto Firmino