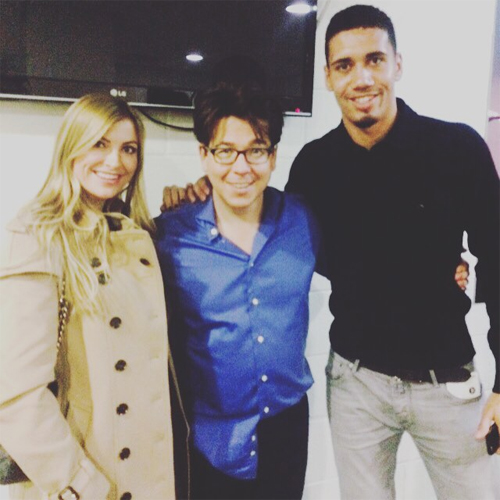 Chris Smalling needed some cheering up after Manchester United crashed out of the League Cup on Wednesday night.

The Red Devils failed to make the breakthrough in normal time despite Louis van Gaal introducing £36m summer signing Anthony Martial from the bench in the second half.

England trio Wayne Rooney, Michael Carrick and Ashley Young all missed their spot-kick attempts in the penalty shootout to hand Middlesbrough victory in the fourth round.

However, Smalling was soon smiling again on Thursday night after the United defender met one of England’s funniest men, Michael McIntyre.

The England international’s glamour model girlfriend Sam Cooke posted the above photo and wrote: “Hope I didn’t embarrass you too much babe @smalling with all the snorting 😄😂 🐽🐽”

Smalling has started all 10 of United’s Premier League games this season.

The Red Devils make the trip to Crystal Palace in their next Premier League game.