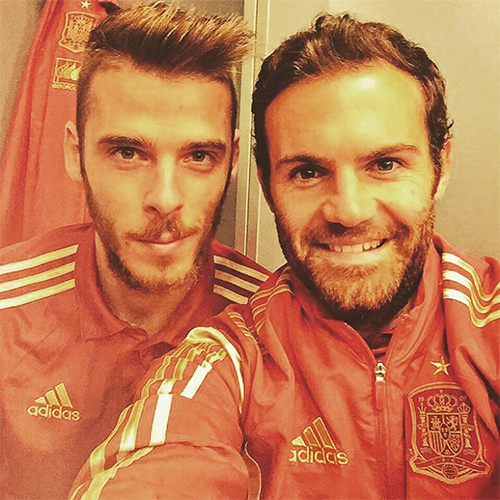 David De Gea and Juan Mata were all smiles ahead of Spain’s clash against Ukraine on Monday night.

The Manchester United pair have already booked their summer holidays in France next year after Spain qualified for Euro 2016 thanks to their 4-0 victory over Luxembourg on Friday night.

De Gea and Mata have become close pals since the latter moved to Old Trafford in a club-record £37.1m deal from Chelsea in January 2014.

While Mata was part of Spain’s side that won Euro 2012 in Ukraine, De Gea was a tad too young to make that squad.

However, the United number one appreciates the significance of their return to the stadium where Mata and co edged to a 4-0 victory over Italy to win their third successive major tournament.

De Gea wrote on his Instagram page: “Looking forward to play in a stadium that’s part of the history of @sefutbol. Last official game before the #Euro2016”

Mata has enjoyed a brilliant start to the season after scoring three goals in United’s last four games.