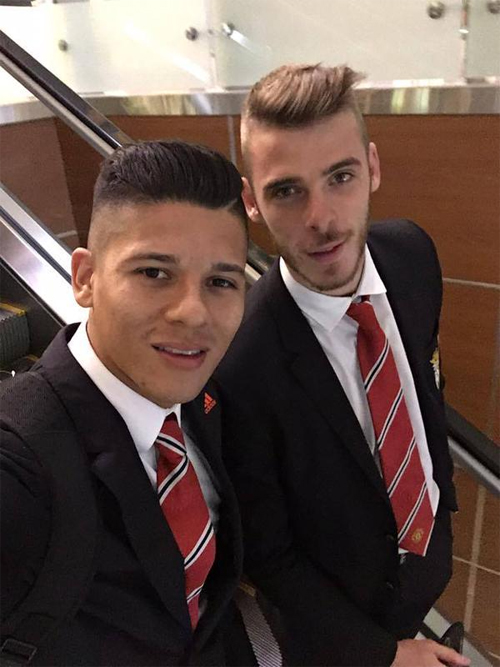 Marcos Rojo and David De Gea are all smiles ahead of Moscow clash Photo: Marcos Rojo/Twitter

Marcos Rojo and David De Gea look in high spirits after the Manchester United pair snapped a selfie in Moscow ahead of their Champions League clash.

The Red Devils made the long trip to the Russian city on Tuesday fresh from a resounding 3-0 victory over Everton at Goodison Park in the Premier League on Saturday afternoon.

Rojo started the game at left-back and impressed with an assist for Ander Herrera’s opening goal of the win, whilst De Gea made a string of saves to deny the home side an avenue back into the game.

The Argentina international grabbed the United number one for a selfie after seemingly landing at their destination ahead of their Champions League group-stage clash against CSKA Moscow on Wednesday night.

Rojo posted the above snap on Twitter and wrote: “Arrival in Russia”

Louis van Gaal’s side were 2-1 winners against Wolfsburg in their last Champions League game after a 2-1 loss to PSV Eindhoven on the opening day of the season.

• United have won only one of seven matches, home and away, against Russian opposition.

• Ryan Giggs, their assistant manager, was in the United team beaten in a penalty shoot-out by FC Torpedo Moskva on the club’s first visit to Moscow for a 1992/93 UEFA Cup first-round tie (aggregate 0-0).

• United won their third European Cup at Moscow’s Luzhniki Stadium in 2008, beating Chelsea on penalties in a match which Wayne Rooney and Michael Carrick started.