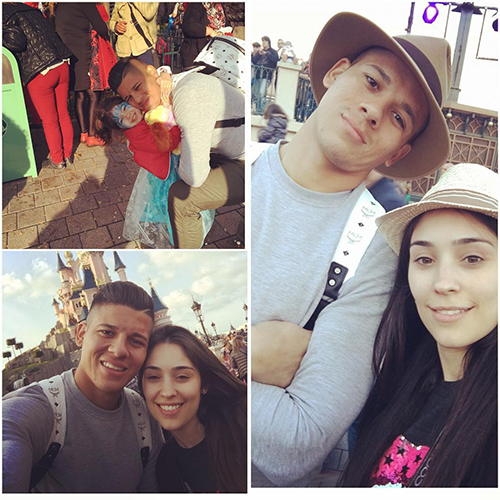 Marcos Rojo is enjoying the perks of being left of your national team squad.

The Argentina international wasn’t called up by the Copa America runners-up following an injury-hit start to the Premier League season.

However, Rojo looked to fill the spare time on his hands with a trip to Disneyland Paris, joined by his model wife and young daughter.

The 25-year-old centre-half has proved every inch the doting father on his Instagram page since his move to Old Trafford in 2014.

And Rojo posted a snap from the resort in the French capital on the photo-sharing app, roping Eugenia Lusardo and daughter Moreno into the shot for a selfie.

Rojo wrote on the photo-sharing app: “Enjoying a few days off with my princesses !!!”

And the United defender posed for a snap with his new friend on Saturday evening.

Proving very much a man of the Disney people, Rojo also managed to secure selfies with Pinocchio and Goofy.

Rojo has made just two appearances in all competitions for United this season.

The Red Devils face Everton at Goodison Park in their next fixture.

Jurgen Klopp is the world-class signing Liverpool have craved