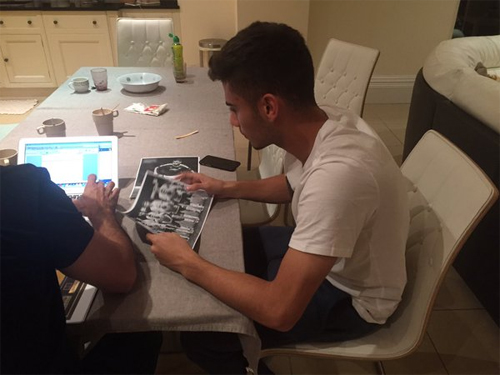 Andreas Pereira was feeling nostalgic on Tuesday night as the Manchester United starlet checked out some of his football photos.

The Brazilian could be in line to make his third United appearance of the season ahead of the visit of Middlesbrough in the fourth round of the League Cup at Old Trafford on Wednesday night.

Pereira scored his first goal for the Red Devils in their 3-0 victory over Ipswich Town in the previous round to help the 20-time English champions secure their progress in the League Cup.

And Pereira spend last night going through some football photos perhaps as a source for inspiration ahead of Wednesday night’s Capital One Cup clash.

Vendo algumas fotos minhas! Looking at some of my pictures! @ManUtd @CBF_Futebol pic.twitter.com/uDc3bzHhb8

Pereira also racked up 28 minutes in the Champions League after coming off the bench in a 2-1 victory over Wolfsburg at Old Trafford earlier this month.
The Red Devils are in fourth place in the Premier League table but just two points behind leaders City.