James Wilson is ready for action for Manchester United 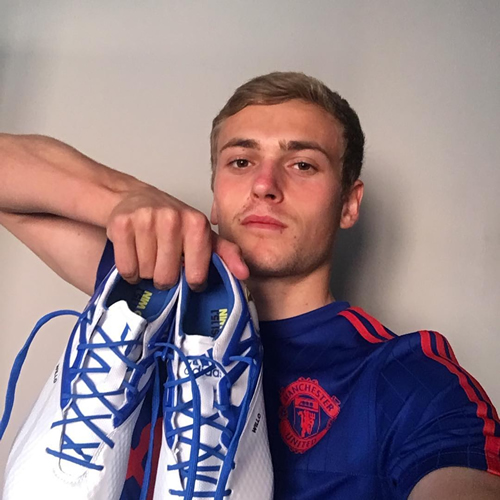 James Wilson has taken to social media to show off his latest pair of football boots ahead of Manchester United’s Premier League showdown with Arsenal on Sunday.

The Red Devils head to Emirates Stadium looking to keep up their recent fine form and their place at the top of the top-flight table.

Louis van Gaal’s men are currently a point ahead of local rivals Manchester City heading into this weekend’s clash.

And Wilson, who is yet to feature for United in the Premier League this season, looked ready for action as he posed for a picture with his latest pair of Adidas boots.

Wilson shared the picture above on his personal Instagram account on Thursday evening and wrote: “Love the new #messi15 boots #bethedifference ⚪️🔵”

Arsenal head into Sunday’s clash with United fourth in the table and knowing that victory over Van Gaal’s side would move them level on points with the Red Devils heading into the forthcoming international break.

Three reasons why Man United can win the Champions League