Manchester United may have looked anything but pretty on the pitch, but these wags had a good time at Old Trafford 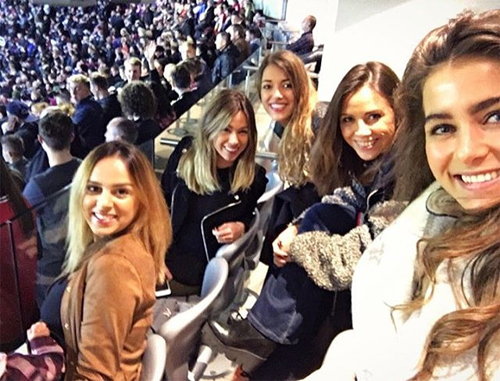 The Manchester United players may have endured a miserable Wednesday night, but some of the players’ partners certainly had fun at Old Trafford.

The Red Devils crashed out of the League Cup at the fourth-round stage after a penalty shootout defeat by Middlesbrough in front of their home supporters.

However, the partners of Anthony Martial, Daley Blind, Matteo Darmian, Juan Mata and Morgan Schneiderlin appeared to have fun together in the Old Trafford stands.

Samantha Martial uploaded a selfie on her Instagram page as she got to know the girlfriends and wives of her husband’s team-mates.

The 19-year-old France international was a second-half substitute for the Red Devils in their surprise Capital One Cup loss.

The Red Devils make the trip to Crystal Palace in the Premier League on Saturday evening.