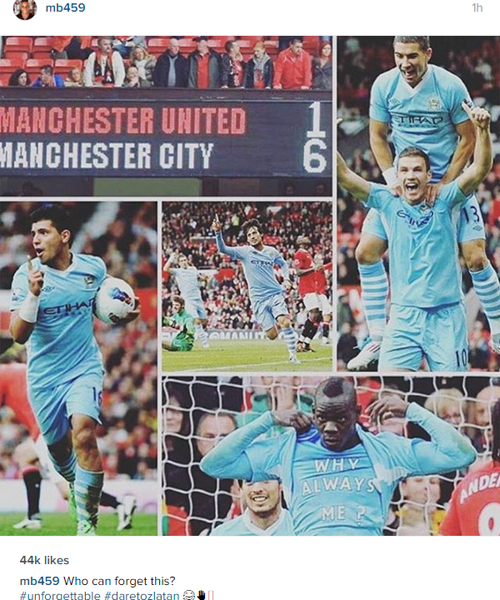 Mario Balotelli has cheekily reminded Manchester United of their 6-1 humiliation at the hands of Manchester City ahead of Sunday’s derby.

The Italy international broke the deadlock in the 22nd minute and he doubled the visitors lead in the 60th minute before Sergio Aguero added a third.

Darren Fletcher offered some late hope for the Red Devils before Edin Dzeko scored a late brace and David Silva completed a memorable win on 23 October 2011.

Balotelli left City for AC Milan in 2012 before he joined Liverpool last summer but was loaned back to the Serie A club after a disappointing season.

And the 24-year-old striker still has a soft spot for City and in particular, one of the defining moments of the Italian’s stalling career so far.

Balotelli wrote on his Instagram page: “Who can forget this? #unforgettable #daretozlatan”

The Citizens went on to win their first Premier League title under Roberto Mancini thanks to Aguero’s last-minute winner against Queens Park Rangers on the final day of the season.

The Red Devils had the last, though, as Balotelli has struggled to hit his City heights since their title success, struggling to impress at Liverpool.