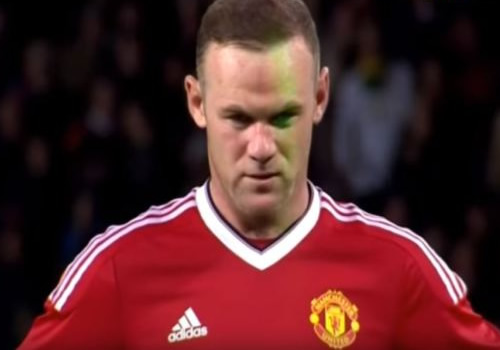 Wayne Rooney was pictured with a green laser on his face before missing his penalty Photo: beIN Sports

Wayne Rooney had a lase shone on his face as he stepped up to take his penalty during Manchester United’s League Cup shootout with Middlesbrough.

The England captain missed the decisive spot-kick after the match ended goalless after extra-time at Old Trafford.

Michael Carrick and Ashley Young also missed their penalties as United were sent crashing out of the competition.

However, United fans were left frustrated after television pictures clearly showed that Rooney had a green laser shone on his face before missing his penalty.

Middlesbrough went on to win the shootout 3-1 and progress to the quarter-finals of the cup, where they will face Everton at the Riverside Stadium.

Louis van Gaal’s side now turn their attentions back to the Premier League and their trip to London to face Crystal Palace on Saturday.

The Red Devils head into the game in fourth place in the table and two points behind leaders and local rivals Manchester City.

Jamie Carragher: Why Chelsea must stick with Jose Mourinho even if Liverpool win