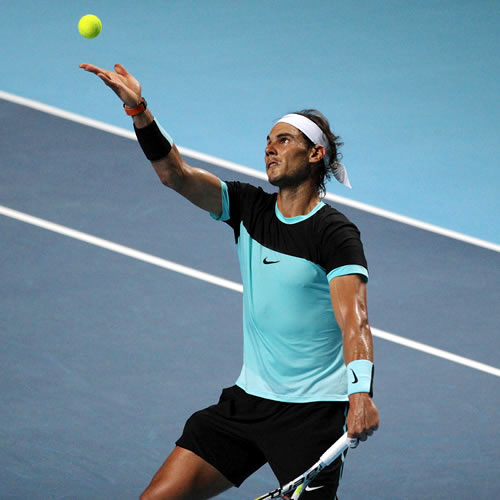 Rafael Nadal is through to his first final in Basel Photo: Marianne Bevis

For the very many fans of Richard Gasquet, this year was proving to be little short of thrilling.

The Frenchman, who burst into the top 10 at barely 21 years old in 2007, and who plays with the variety, flair and one-handed backhand that can produce the kind of magic that has tennis enthusiasts reaching for superlatives, has been enjoying a rich vein of form.

Considering that he was forced to withdraw from three Masters tournaments with injury this year, it was certainly impressive that he was within touching distance of qualifying for the World Tour Finals for only the third time.

To convert his first-reserve spot into No8, he had to win both the Basel title and then the Paris Masters next week, but even so, a climb from 27 this time last year to a current 11—No9 in the race—suggested a serious improvement. A career-best Grand Slam performance this year alone proved the point—a semi run at Wimbledon and the quarters of the US Open—plus titles in Montpellier and Estoril, and last week a semi-final finish in Stockholm.

His draw was far from easy in Basel, too, but he scored two three-set wins against the big-serving odds of Jiri Vesely and Ivo Karlovic, and outplayed the hugely talented Dominic Thiem in straight sets.

The thrill for fans, though, has come not just from the rise back to the top 10 but in the manner of his tennis: It recalled the aggressive, fast-paced game that jumped off the court in his earliest appearances. He admitted this week that this had been a concerted effort.

“I am trying to increase my aggressive game. It’s been important for my season. Of course the most important thing is to serve better—I am working every day on that part—to be better on the court… I am trying to do that but of course it’s not easy, but it’s important to be in the semi-final here.

He added of his Karlovic match: “Mentally I was strong on the court, and that made a difference.”

And that would be a crucial component if he was to stand any chance of reaching the final, because he now faced his nemesis, Rafael Nadal: 13 matches, 13 losses, and the last, in Beijing last year, and near whitewash, 6-4, 6-0.

If he ever had a chance, perhaps Basel was the time. Nadal, who had only slowly begun to regain his form after a difficult end to 2014 marred by injury and surgery, has never been the biggest fan of indoor hard courts, and he had taken three sets in all three matches thus far, though his opposition had certainly been tough: Lukas Rosol, Grigor Dimitrov and Marin Cilic.

The No3 seeded Spaniard was undoubtedly regaining his confidence, and every test safely negotiated only boosted it.

It all started well for the Frenchman, though. He began at full pelt to take advantage of a couple of poor shots by Nadal for an immediate break. He then made a tough hold from deuce with a first backhand winner, and the fourth game was a string of Gasquet winners: two aces and two forehand winners, 3-1.

It looked worse for Nadal in the next game, too, as he tweaked his right knee, flexed it a few times, but held. He did not take medical help until after the seventh game, and played the rest of the match in dejà vu mode: strapping around a knee that once upon a time gave him such problems, including several extended absences from the tour.

The good news for him, though, was that it seemed not to impede his movement—indeed he looked stronger, more fluid and more confident with each game. Gasquet only had to make a couple of errors, which he did in the eighth game, and Nadal broke back and the held to love.

With both now playing some stunning shots—the stand-outs a round-the-post forehand winner from Nadal and a down-the-line backhand winner from Gasquet—the Frenchman was fighting for his life, and a winning forehand down the line from Nadal made the break for the set, 6-4 after 50 minutes.

The second set began in exactly the same way, though it took Gasquet longer to break in the opening game—seven break points. The Frenchman came under immediate pressure back, as Nadal opened with a perfect lob, and then a drop winner. A double fault, and Gasquet faced two break points, but he survived.

It had taken 20 minutes, but Gasquet led 2-0, and this time he held onto his lead through the entire set, until serving to level the game. The Frenchman seemed overcome by nerves, double faulted twice, Nadal smelled blood, and raced to the net to break, 5-5. They headed to a tie-break.

Nadal got the first advantage, but twice fired into the net to hand the lead back to Gasquet, and the Frenchman had another bite of the cherry, two set points on serve. Again, Nadal came up with his most penetrating tennis, and eventually Gasquet succumbed, just as he had done in every match before. But it had taken over two hours, and it had been a thriller.

Now Gasquet must bide his time as the reserve for London’s O2.

Nadal, though, afterwards explained how important this win had been for him: “Really a very important week for me… I try my best every day. Sometimes it goes better, sometimes it doesn’t. That’s real sport. If you are not improving all your career, it is difficult to stay at the top of the game.”

Then he turned his attention to a possible 34th meeting with one of his oldest rivals, home-town boy and defending champion, Roger Federer.

“To be honest, I would have liked [to be in an era with] easier competition. I have been in an era where I competed against great players: Roger has won the most Grand Slams, Novak is one of best in history no doubt… Roger played in Madrid a couple of times. I now play in his tournament. I look forward to it.”

However, Federer had yet to confirm his place in such a highly-anticipated final.