Photo: Rafael Nadal all smiles with his girlfriend in Basel 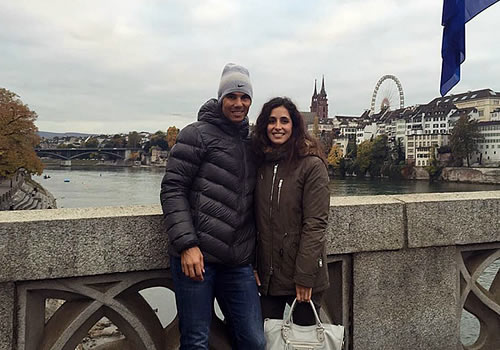 Rafael Nadal looked in good spirits as he enjoyed a stroll around Basel with his girlfriend Maria Francisca Perello on Friday.

The 29-year-old is gearing up for the Swiss Indoors tournament in Basel, which takes place between Monday 26 October and Sunday 1 November.

Nada, who qualified for the season-ending ATP World Tour Finals in London earlier this month, is set to join the likes of Roger Federer and Stanislas Wawrinka in competing in Switzerland.

And the Spaniard enjoyed some downtime with his long-term partner Maria on Friday afternoon ahead of the tournament.

Nadal posted the picture above of himself with his girlfriend in Basel on his personal Instagram account and wrote: “Taking a walk in #Basel.”

Nadal was beaten in three sets by Jo-Wilfried Tsonga in the semi-finals of the Shanghai Masters last week.

Defending champion Federer has dominated the history of the Swiss Indoors Basel, reaching more finals and picking up more silverware than any other player, with six titles to his name.

Nadal recently confirmed that he is set to play at the Rio Open in Brazil in February. The clay-court tournament takes place between 15-21 February 2016 and Nadal won the inaugural event in 2014.

“The Rio Open is an important event on the tennis calendar in a special country,” said Nadal. “I have developed a great relationship with the Brazilian public over the last two years and I love going back there.”