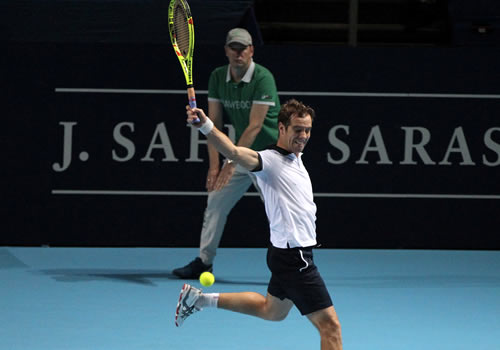 Considering that the 29-year-old Frenchman Richard Gasquet has been forced to withdraw from three Masters tournaments so far this year—Miami, Monte Carlo and Montreal—he has put together an impressive year that he might still cap with a career-third visit to the ATP World Tour Finals.

In practice, his ticket would be as a reserve, for the man with one of the most flexible and elegant one-handed backhands in tennis needs to win the titles in Basel and at next week’s Paris Masters to overtake David Ferrer and Kei Nishikori, the clear favourites for berths No7 and 8.

Even so, rather like many of his contemporaries, Gasquet has quietly been putting together one of his best seasons since he burst like a fully-formed superstar onto the tennis stage with a surge to No7 in the rankings in 2008, aged 21.

It has certainly been his best Grand Slam season, with a semi run at Wimbledon and the quarters of the US Open. Last week, he kept himself in the mix for London with a semi-final finish in Stockholm, and has to win just one more match in Basel to overtake compatriot Jo-Wilfried Tsonga for the No9 spot in the Race.

In his opener, Gasquet had a major undertaking, though, facing as he did the huge 22-year-old Czech, Jiri Vesely. The challenger won his first title at the start of the year, reached the final in Bucharest and the semis in Casablanca, and after a quarter-final run in Shenzhen, was close to a career-best 38 in the rankings.

He also happened to be left-handed, and against the smaller stature and one-handed backhand of Gasquet, that could have been a liability for the Frenchman. Sure enough the Czech worked away at the wide backhand wing of Gasquet, but the Frenchman’s strength and variety in that area was on full show as he blocked, sliced and went for full-blooded winners down the line.

What’s more, Gasquet broke straight away, and very nearly did the same at 5-3 up. Vesely held off the challenge, but Gasquet served it the first set, 6-3.

The big, dangerous Czech, though, who outlasted the even bigger-serving Ivo Karlovic in five sets at the US Open this summer, was not done. In a long, tense second set, during which neither man faced a break point and each made over 85 percent of first-serve points, it would go to a tie-break—and the Czech raced through to level the match, 7-6(2).

Gasquet would have to defend his only two break points of the match in the third, but his serving remained strong: He actually ended the match with 13 aces to Vesely’s 11. So they stayed on level terms until the decisive moment as Vesely served to stay in the match, and he conceded the vital break to Gasquet after more than two hours, 6-4.
For a shot considered by many to be ‘old school’, the one-handed backhand continues to flourish, then. The 32-man draw in Basel has boasted no fewer than 10 of them, and not just among the older generation of Roger Federer, Philipp Kohlschreiber, Stan Wawrinka and Karlovic.

Two young adherents, and arguably two of the best players among the under-25s, are playing in Basel: Grigor Dimitrov and Dominic Thiem. 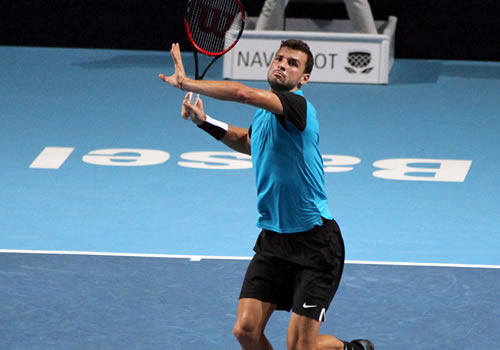 The 22-year-old Thiem from Austria won his first three titles this year to surge to 19 in the rankings. Not surprisingly, then, he is one of the four nominees in the ATP World Tour Awards this year in the Most Improved Player category.

In Basel, he was one of the first to reach the second round, winning a tough three-setter on Monday over Robin Haase… and he plays Gasquet next.

Dimitrov, whose talent and charisma have never been in doubt, has struggled with consistency this year and finds himself unseeded here after reaching the quarters last year from a top-10 position. Nevertheless, he sailed past fellow one-hander Sergiy Stakhovsky, 6-3, 6-4, to set up a meeting with Rafael Nadal.

Dimitrov has lost all six of his previous matches against the Spaniard, but then, as Federer said about his 10-0 record against his next opponent, “It goes both ways. If you’ve beaten someone 10 times, you always feel like maybe next time it won’t happen anymore.”

Federer and Kohlschreiber are the only one-handers in the top half of the draw, and play one another for a place in the quarter-finals tomorrow.

However four of the eight in the bottom half are already through to the second round, with at least one more guaranteed to join them when Wawrinka and Karlovic meet this evening. Leonardo Mayer can add his name to the one-handed second-rounders if he beats Teymuraz Gabashvili this afternoon.